Richmond, Virginia-based Hunky Cousin was formed in early 2016 by guitarist Roger Pouncey. Pouncey wanted to assemble a band to play his originals as well as unique interpretations of standard and contemporary compositions. For his band, he chose saxophonist Trey Sorrells, bassist Jordan Mason, keyboardist Garen Dorsey, and drummer Cleandre Foster, all of whom he had played with extensively in other groups. The shared history and friendships of the musicians can be felt in their performances. The trust between the players allows each member to play at their highest level. As comfortable playing Daft Punk as they are Miles Davis, Hunky Cousin is able to combine the sincerity and immediacy of jazz with the infectious energy of funk, rock, and pop. 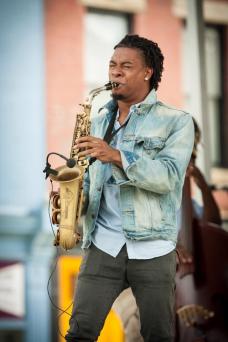